Update: An independent criminal investigator is inquiring into this case.

I was advised by the Attorney General via the enclosed letter to contact your office to discuss documented interference in a FWPD investigation. The interference, according to your office and two FWPD officers, was conducted [by the Tarrant County District Attorney’s office] at the request of a local family that maintains close ties with the DA. 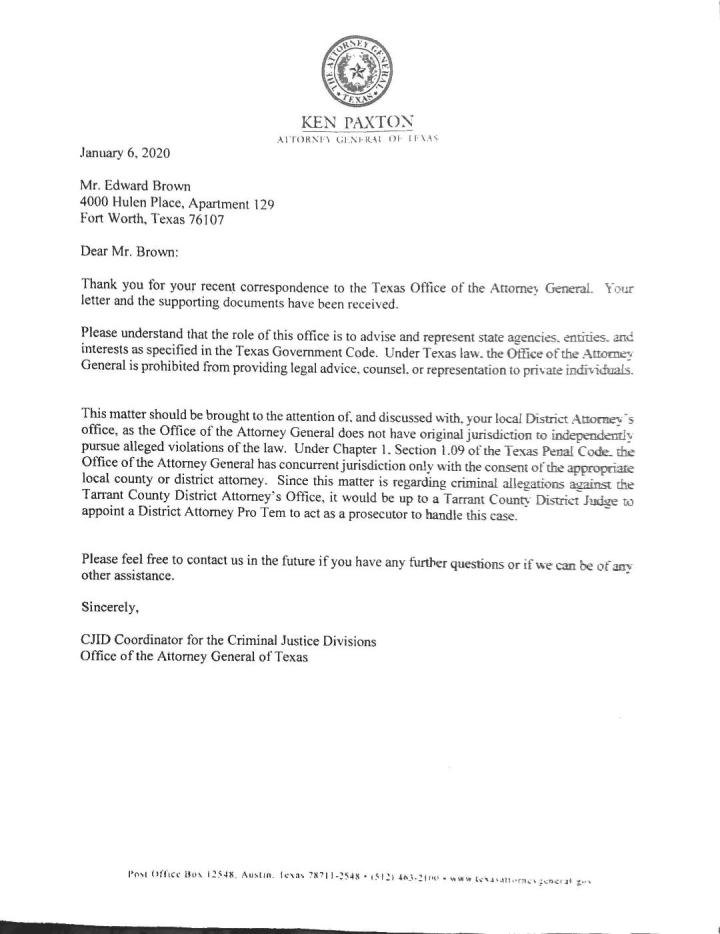 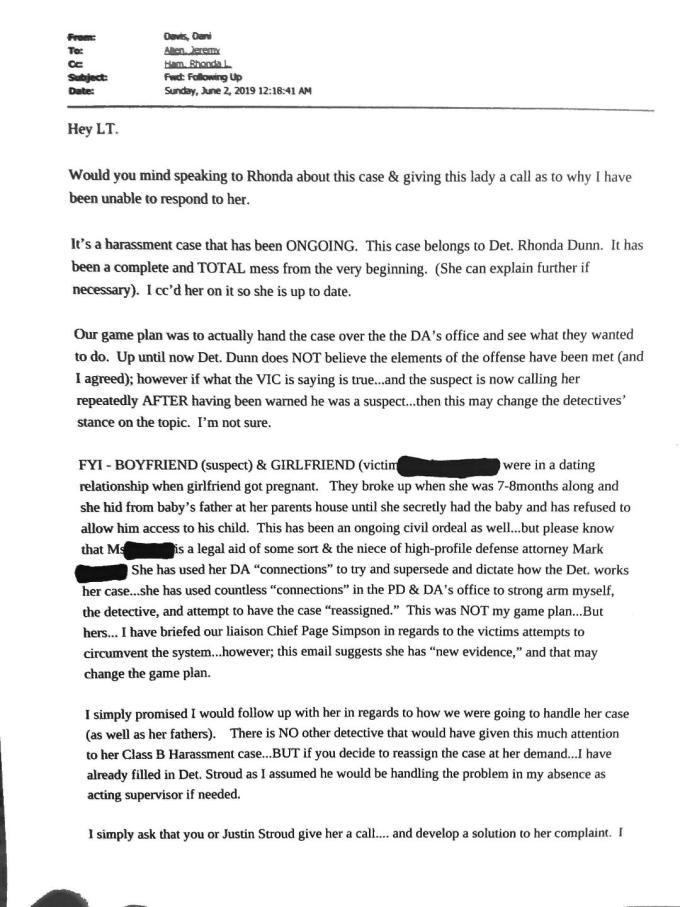 Obstruction of Justice in Tarrant County

The Obstruction of Justice Playbook

Did members of the Tarrant County District Attorney’s office commit criminal obstruction of justice as a favor for a local wealthy family? What are the implications for the subsequently attempted cover-up by the Fort Worth Police Department’s Office of Internal Affairs?

Update: U.S. Representative Kay Granger has notified me that her office “was able to forward your concerns to the FBI for their review. Please note that the FBI may reach out to you directly.”

Update: Sen. Jane Nelson replied, “Public corruption is a serious allegation. I have contacted the Texas Department of Public Safety, which informed me that complaints may be filed with the Rangers.”

One of the most pervasive criticisms of our criminal justice system is that it favors the well-connected and targets the poor and vulnerable. This criticism is not without merit. In Tarrant County, knowing the right people at the DA’s office can lend you the resources to strong-arm Fort Worth’s peace officers with little to no risk of being held accountable.

I have spent the last several months documenting and collecting evidence of nepotism, abuse of power, and obstruction of justice at the highest positions of power in Fort Worth and Tarrant County. Through sworn complaints, public speeches, countless letters, and this blog, I plan to raise public awareness of unethical and potentially illegal acts that were committed by high-ranking officials in Tarrant County.

Last June, a law enforcement officer who observed obstruction of justice verbally recounted the wrongdoing to me through a phone call. Members of the District Attorney’s office were using their positions to interfere with a custody suit on behalf of a local, well-connected family, I was told. The officer asked to remain anonymous, and I have only provided that individual’s name to my editors at the Weekly. Everything recounted in this blog reflects my personal views and research and does not reflect the views of any publication I work for.

The suit personally involves me, and I am unable to provide any details related to the ongoing legal battle until it is fully resolved. Suffice to say, a wealthy family does not want that effort to end in my favor, and they have had the support of the DA’s office as well as multiple members of the FWPD, according to DA documents and emails I later retrieved through open records requests (see below).

As DA documents recounted (see below), an intake attorney met extensively with one member of this well-connected family early in 2019 when they formulated a plan to disrupt an ongoing family custody suit. The Assistant District Attorney, according to the DA, had initially rejected the individual’s efforts to press harassment charges against me. After personal connections were used, according to the DA, the individual was given entry into the DA’s office and, according to one FWPD officer, “countless DA connections.”

The efforts of the ADA and this individual resulted in the “strong-arming” of two FWPD officers into forwarding the very harassment changes that the DA had rejected only months before. The ADA, according to DA documents, promised this well-connected individual that multiple criminal charges would be brought once FWPD was forced to comply.

Sec. 38.15. INTERFERENCE WITH PUBLIC DUTIES. (a) A person commits an offense if the person with criminal negligence interrupts, disrupts, impedes, or otherwise interferes with:

One would imagine that the City of Fort Worth or FWPD would take an interest in documented strongarming of FWPD officers by the DA’s office. On August 26, 2019, I filed a sworn complaint with the City of Fort Worth after learning from a first-hand source that the District Attorney’s office had strong-armed FWPD into complying with the wishes of a well-connected local family.

In response to my sworn complaint, FWPD’s Office of Internal Affairs responded with misleading and false statements that were intended to cover up wrongdoing by the DA’s office.

Once again, I was informed that [the officer] was not pressured or influenced in her actions regarding your case by anyone from the DA’s office or her chain of command.

There was also no evidence that showed that she was at any time, improperly influenced by anyone from her chain of command or the DA’s office. It is because of that lack of evidence that our investigation has been closed.

We have looked into it extensively. If I had anything to tell you or evidence that the DA was influencing us, I’d tell ya. I’d tell the DA. If there was evidence of misconduct. I can’t find any of that on our end. […] There was a meeting about your case. The DA who had scheduled this meeting had taken a month off. […] We did not find evidence of influence. I’m telling you what we’ve found. We found no influence.

After observing and documenting these acts, I have filed sworn complaints with FWPD Chief Ed Kraus, DA Sharen Wilson, Criminal Division Chief Larry Moore, Mayor Betsy Price, and the City of Fort Worth. I have spoken at city council and Tarrant County Commissioner’s Court. I have mailed certified packages to every state representative and senator in Tarrant County. The response has been silence.

Our elected officials continue to choose supporting criminal acts, so my efforts to raise public awareness of these events continue elsewhere. Daily, I am communicating these events to local journalists, politicians, and community leaders. I am seeking public speaking events and publications through media outlets.

If you have any connections with the Texas Rangers, FBI, or any law enforcement agency, I welcome your support. My email is ejb0017@yahoo.com.

I was advised by the Attorney General via the enclosed letter to contact your office to discuss documented interference in a FWPD investigation. The interference, according to your office and two FWPD officers, was conducted at the request of a local family that maintains close ties with the DA.

Based on first-hand conversations I have had with FWPD officials and DA documents that I have read, it is my belief that one or more DA officials knowingly acted in a manner that has interfered with an ongoing […] suit. In this letter, I will detail the events and individuals who likely acted on behalf of my REDACTED’s family and against the interests of my daughter. My daughter, whom I have never seen, is now 18 months old.

On January 9, my REDACTED was notified that her case would not be accepted by the DA’s office. The DA had determined that my REDACTED was motivated by a desire to keep her daughter from seeing her father. A law enforcement official who read this document described the internal opinion to me. After the DA’s opinion was issued, one or more DA officials began acting on my REDACTED’s behalf and against the judgment of the FWPD in an effort to criminalize my efforts to see my child.

By June 17 of this year, according to the DA, REDACTED had met with an ADA around 10  times. My REDACTED the ADA discussed ways that I could be charged with harassment even though the DA’s stated opinion of REDACTED’s efforts were known and documented.

Here is an excerpt from the DA’s description of the case:

“The way they got the police to refer it over was based on that one incident. The ADA told [REDACTED] that [the DA was] going to add charges and also to look into stalking.”

The one incident refers to my attempt to communicate with the grown male who was hiding my child from me in his home for several months. My [REDACTED] father never allowed our family to see or hear from our child. On March 28, [REDACTED] was served orders to begin a child custody suit to unite my daughter with her father. My [REDACTED] described FWPD’s intentions to not pursue her case given her past documented behavior.

FWPD “officers don’t like to refer it over to” the DA’s office, according to the DA document.

On May 1, and after numerous meetings with [REDACTED], the ADA stated that “it did not matter who sent the phone records (referring to someone other than my [REDACTED]. Allowing my [REDACTED] father’s phone to ring is abusive.”

After the ADA and my [REDACTED] determined how they would criminalize my attempts to reach my child, as described in the DA’s own document, an effort began to compel FWPD to bring the case forward. I base this understanding on three sources: a first-hand conversation with a law enforcement officer who observed the DA’s interference, the DA’s description of its actions, and a conversation I had with Lt. Walls. In that conversation, he described a meeting between FWPD and the DA where my case was discussed.

I have filed a sworn complaint with the City of Fort Worth and have met with one member of the City Attorney’s office in person. I am using that complaint to determine which members of FWPD pressured Det. Dunn to submit [REDACTED]’s file. If members of FWPD did work at the behest of a member of the [REDACTED] family, they violated FWPD’s ethics code. My conversations with FWPD have included Det. Scroggins and Lt. Walls.

In short, I have documented and continue to document this summary of the DA’s actions:

Last January, the District Attorney’s office concluded that my [REDACTED]’s efforts to press charges were motivated by a desire to separate my daughter from her father. After reaching this conclusion, the DA’s office underwent a lengthy and documented effort to aid my [REDACTED] in her efforts to separate my daughter from her father. Around March 28, when my [REDACTED] was notified of the ongoing Tarrant County Family Court custody suit, the ADA met with my [REDACTED] extensively. Together, according to the DA, they formulated a plan that allowed them to force FWPD to hand over documents related to my case. Those efforts have complicated the ongoing [REDACED] suit, according to my lawyer, Sean Lynch.

It should be asked why a law enforcement official would risk his or her own career to share intimate details about my case. The answer is that the peace officer was disturbed to witness a wealthy and well-connected family use the DA to serve the aim of separating a small child from her father.

Everything I have described in this letter is based on primary sources: Tarrant County District Attorney documents, first-person conversations with law enforcement individuals, and communications related to my sworn complaint with the City of Fort Worth.

The ramifications of these documented incidents should not be underestimated. I wish for this case to be reviewed and to be given a contact at the DA’s office whom I can meet with in person.